A kitten who was left inside a house by his mom, now has a couple to raise him and keep him company.

Early this year, Danielle Chavez, the founder of With Grace (a rescue group in Las Vegas), was contacted about a litter of kittens born in a house that was being remodeled in Arizona.

“We have a spay and neuter clinic that we frequently use for our fosters, and one of the staff members reached out to us for help with some abandoned neonatal kittens,” Danielle shared with Love Meow.

A feral cat had snuck into the house through the walls to have her kittens, but left them behind and never returned to them. 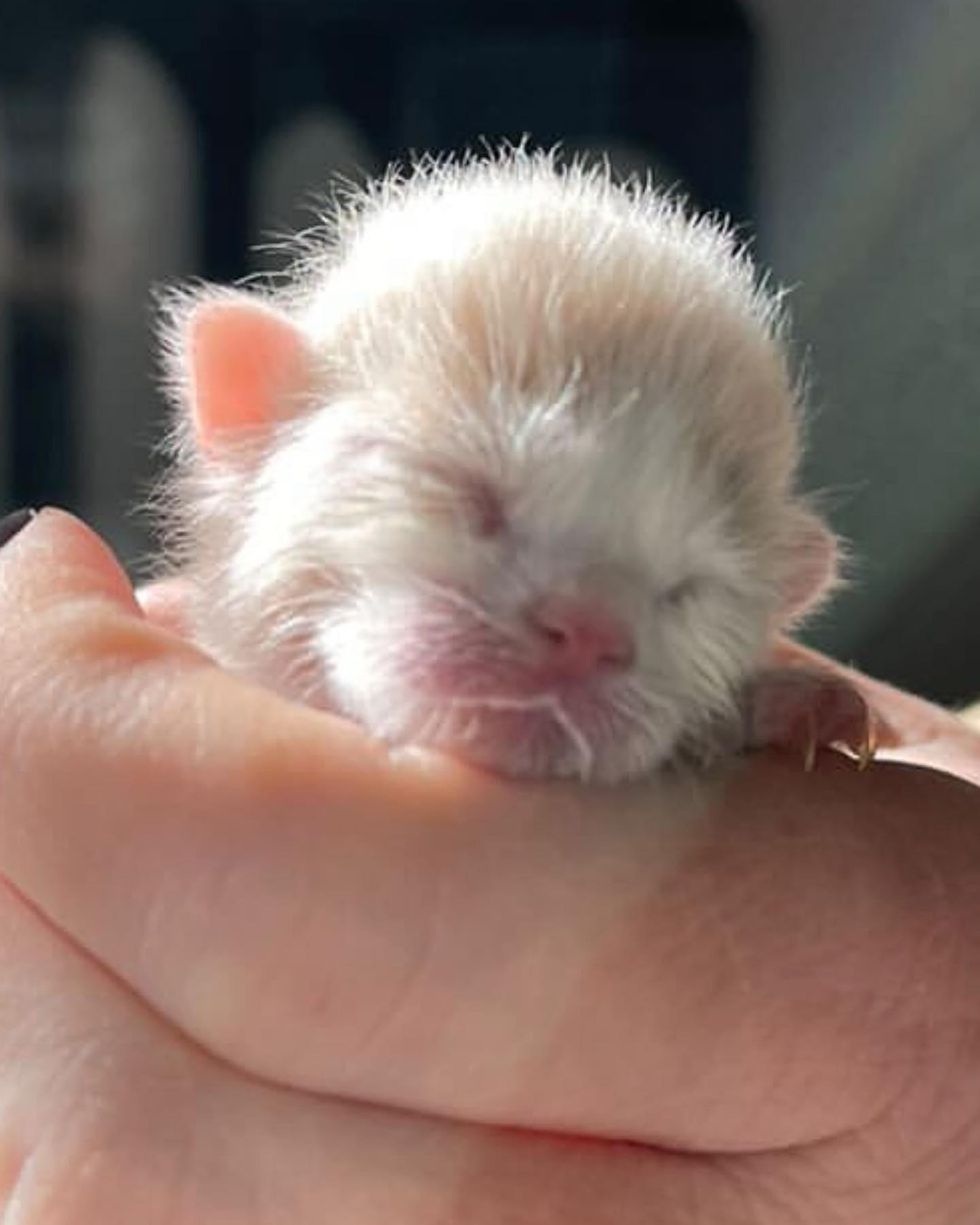 “The homeowner drove the kittens from Arizona to Las Vegas, where we met up. We rushed them home, where our incubator was warm and ready for them.”

The kittens were very small, weighing in around 60 grams. Despite their best efforts to save them all, two of them were too frail and didn’t pull through. The remaining kitten, Michael, hung in there with all his might—he took to the bottle and ate to his heart’s content, trying to strengthen his body. 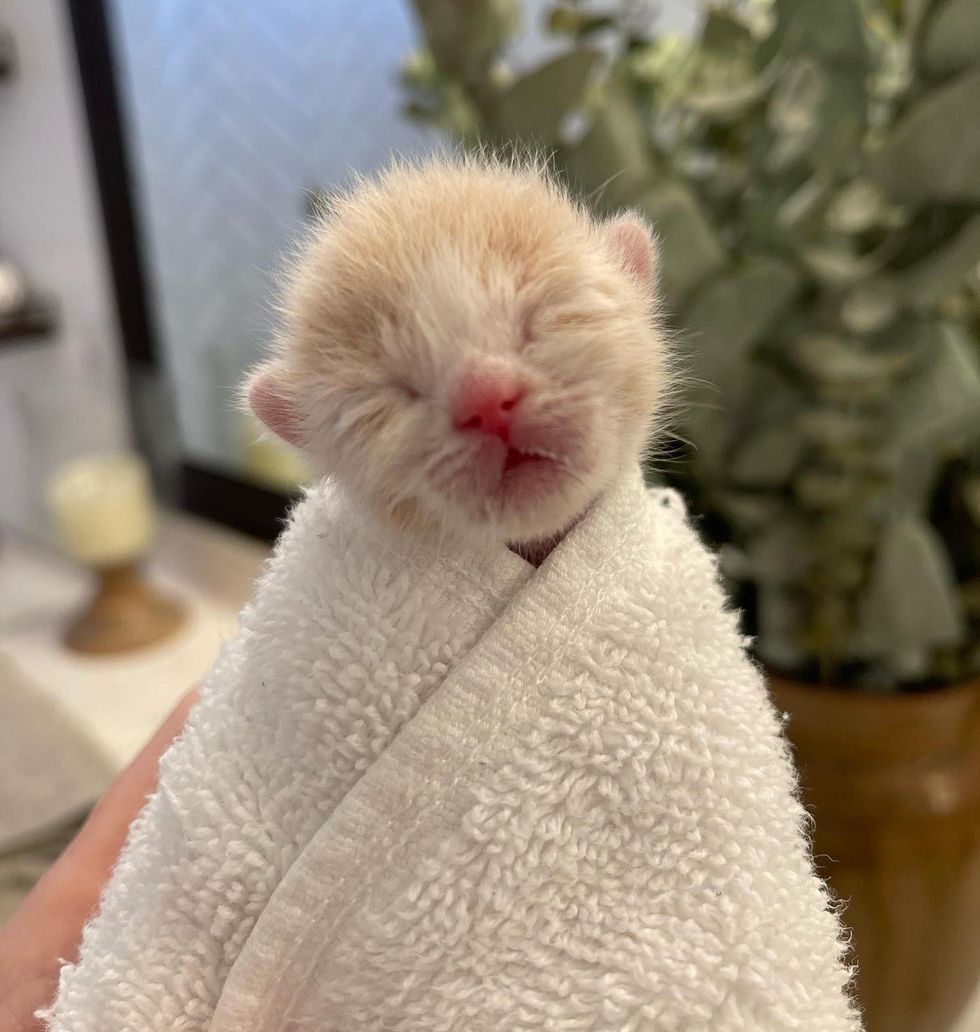 “After a few days of being a helicopter foster mom, I could tell this little one had the fight in him. I just knew he was going to be okay,” Danielle told Love Meow. “He latched onto the bottle right away and never looked back.”

While Michael started to thrive in foster care, a fellow rescue in Arizona, Feral Cat Warriors, offered to TNR (trap-neuter-return) the cat colony where the kittens were from, so their cat mom could be spayed, vetted and properly cared for. “It’s so important that rescue is full circle.” 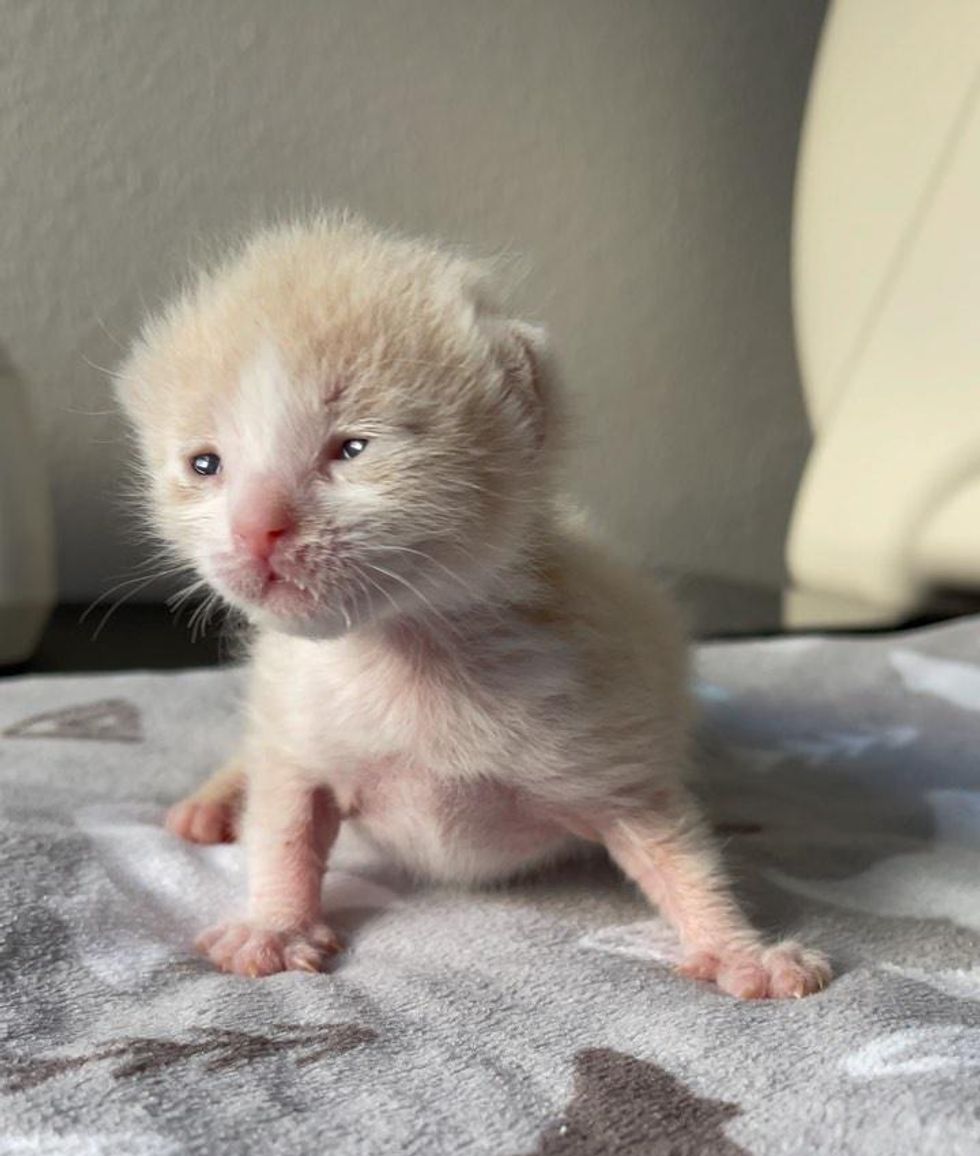 Danielle and her husband worked as a team to feed the kitten and cater to his every need.

“I stayed up late to give him a bottle and Foster Dad got up early before work to feed him. So, we both got a full night’s sleep, and little man got his noms.” 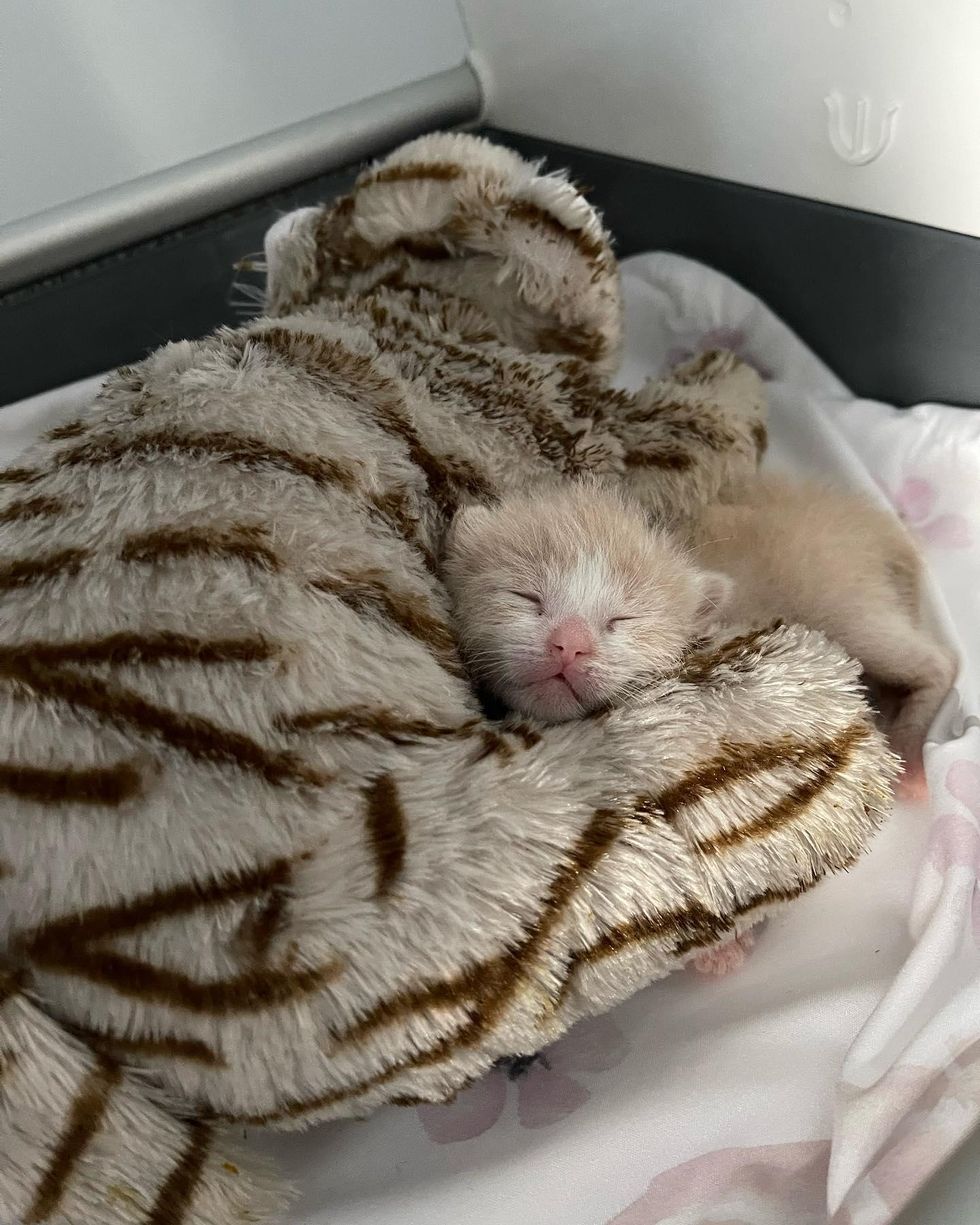 He snuggled with his faux mama when he nappedWith Grace @withgracerescue

Once Michael graduated into his very own playpen—a monumental achievement by the little guy, his adventurous, playful side came out in full swing.

Watch Michael the kitten in this cute video:

He insists on following his foster parents at all times and isn’t bashful about demanding what he wants. “Michael is such a sweet baby. He always wants to be with us. He’s my little Velcro buddy.” 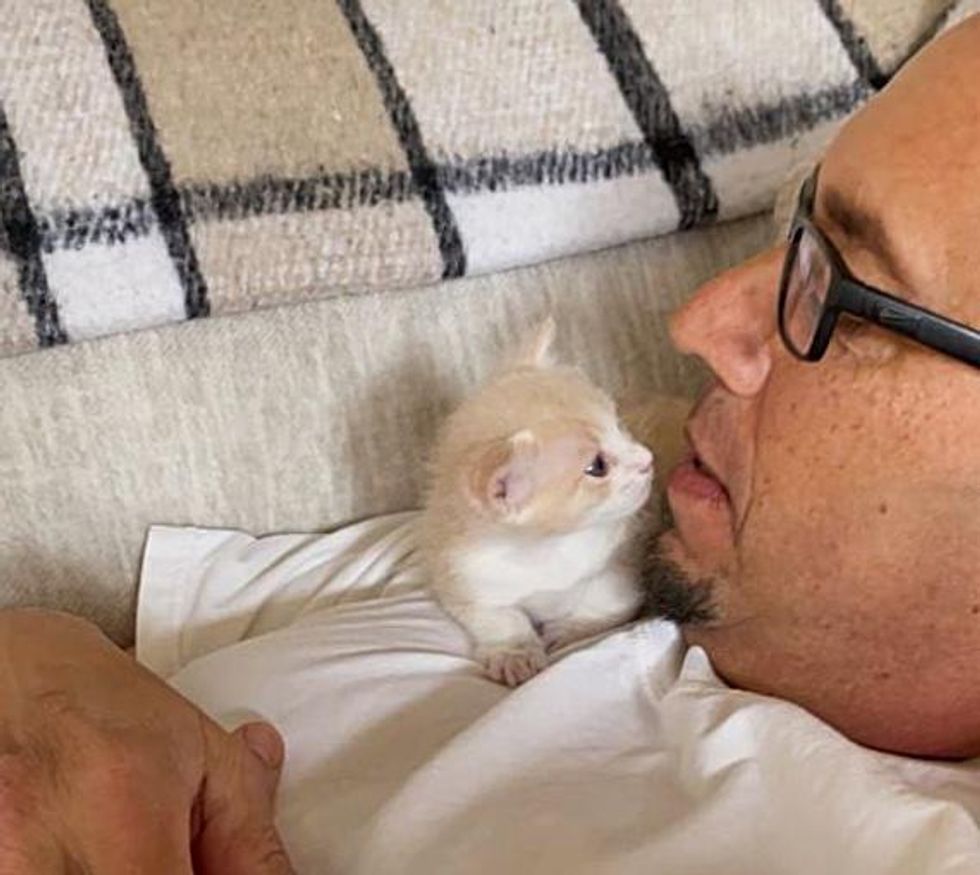 “We moved him into our living room, in a playpen, to socialize him around our cats,” Danielle told Love Meow.

“Slowly but surely, he’s learning how to cat. He recently figured out the crab-walk and he’s on his way to learning the wiggle butt, ambush attack move.” 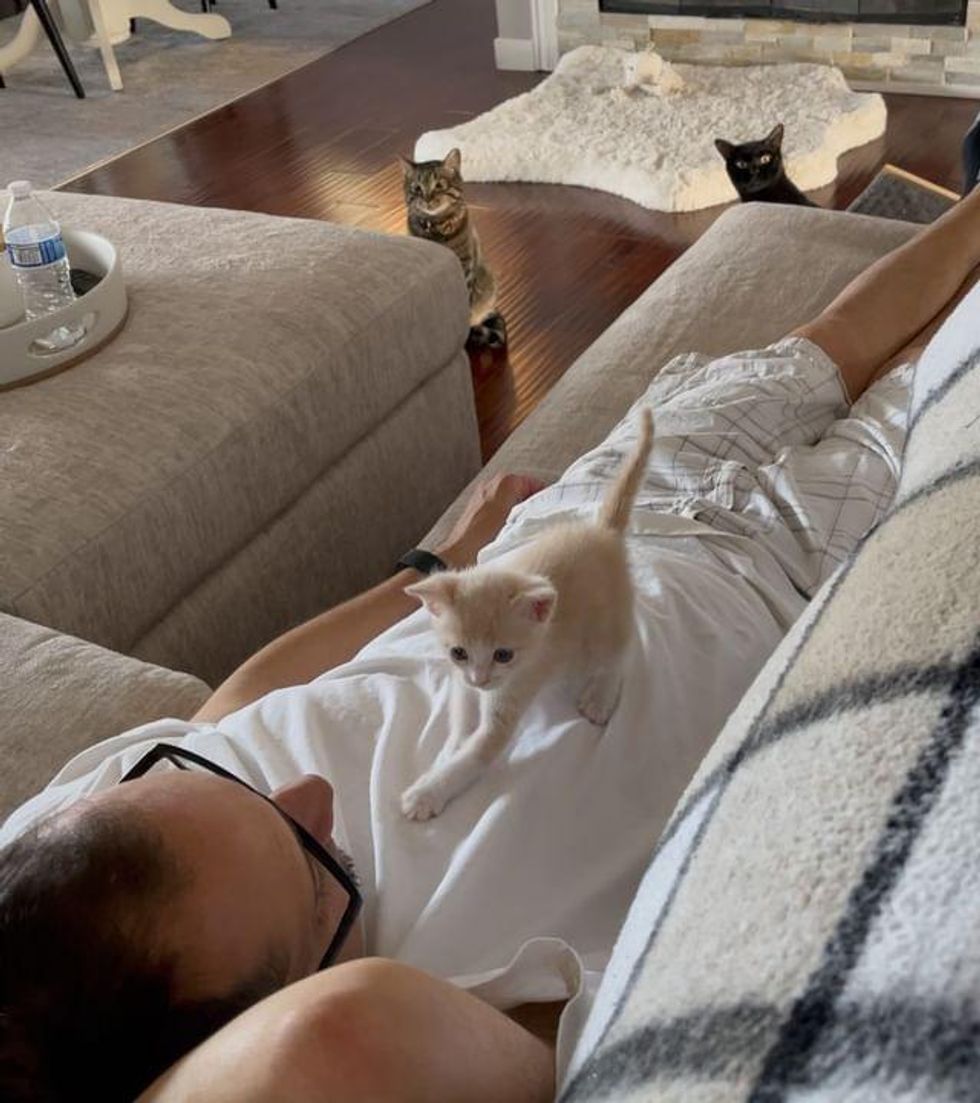 Michael has blossomed into a rambunctious little fella who enjoys rubbing his face against his foster dad’s beard while kneading on his neck. He is friendly to the resident cats and has learned a few feline skills and etiquette from them.

“He’s so adorable to watch. He’s gaining more and more self-confidence every day. He’s going to be running laps around the other cats in just a matter of time.” 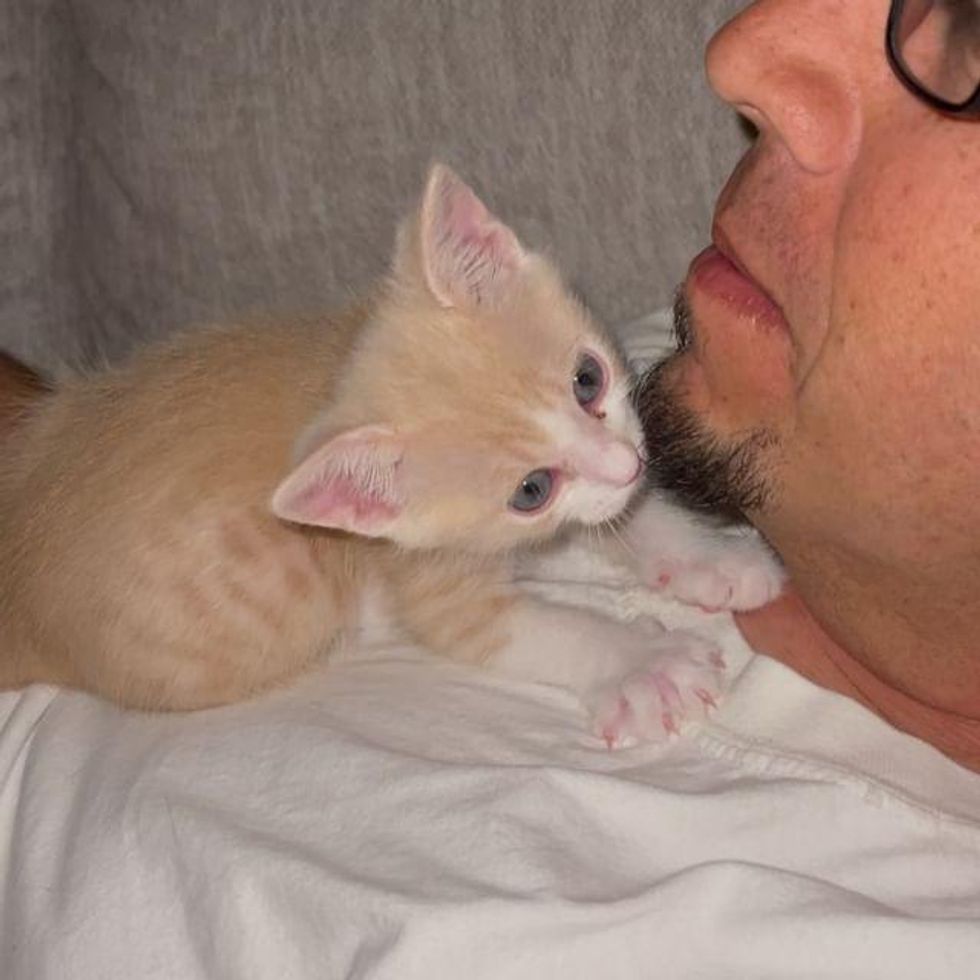 Michael is almost seven weeks old and will be ready for adoption in a few weeks. He has an endearing personality and makes the perfect little companion to his humans.

When he needs a break from playing, he comes running to his foster parents, makes biscuits on their lap, chest or neck while he purrs up a storm. 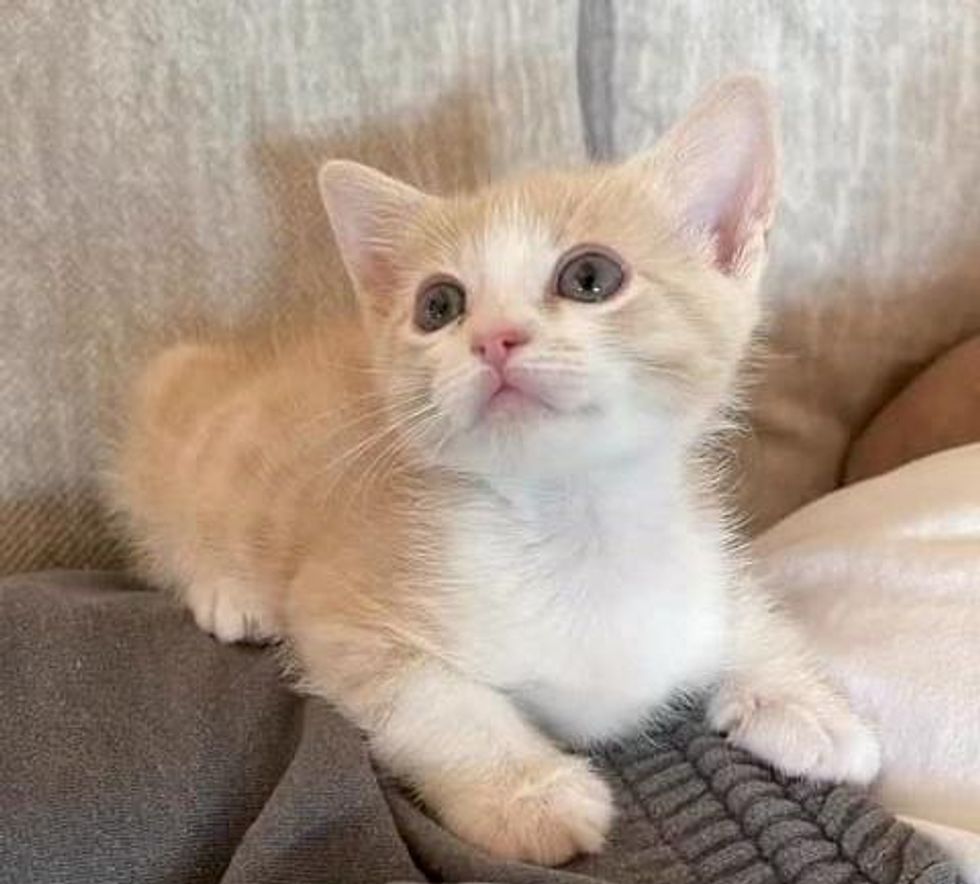 Related story: Kitten Follows Cat Home and Decides She is Never Leaving After Life on the Streets